The gorilla trekking encounter is possible all year round in the destinations where they are found. These include; Bwindi and Mgahinga National Parks in Uganda and Volcanoes National Park in Rwanda. Sometimes, travellers prefer the drier months of June to September and December to February compared to the other months as a result of rain that always characterize those months. More Info about Best time To Track Gorillas 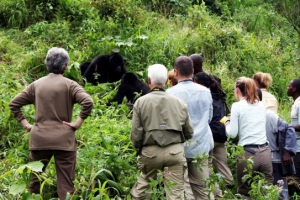 In Rwanda, the rain season commences towards the end of February and run through March, April and May. Rwanda safari undertakers tend to avoid these months as trekking experience becomes too muddy and cold. However, it should be noted that as a result of these rains, gorilla food is in abundance on lower slopes where they prefer to keep also benefiting from its relative warm temperatures compared to the cold conditions in the upper slopes. This in turn makes trekking experience about two (2) hour hike and mostly it does not exceed 2Pm. 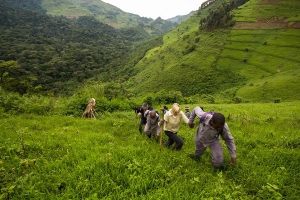 In Uganda, there are two rain seasons one stretching from late March through April and May and another one in October and November. It can be admitted that during rainy seasons, gorilla trekking is challenging as it is hard to hike slippery slopes however it can still be possible and with the case of tropical Africa regardless of rain the sun still appears every day for some good hours.

The varying gorilla trekking seasons also tend to be influenced by the weather conditions of the generating regions. For example, in Europe during summer gorilla trekkers increase and the number reduces during winter.

In a bid to neutralize this seasonality effect, destinations like Uganda offer discounted gorilla tracking rates to assist people who endure such conditions to save and travel at a low a cost. Gorilla permits in Uganda in the months of April, May and November are discounted compared to other months.

Idealistically, the best gorilla trekking period is during the dry months of June, July August, September, October, December, January and February when the soils are firm, temperatures are very warm and the forests are clear. However, the gorilla trekking encounter can be done all the year round.

The 12 Days Rwanda safari is a detailed safari package that takes you around Rwanda exploring her range of natural and cultural attractions and activities. Read More

The 10 day Rwanda safari gives you the opportunity to track gorillas in Volcanoes National Park, Chimpanzee tracking in Nyungwe forest National Park, some historical areas in the city and so many others. Read More

The 10 days Rwanda – Uganda gorilla safari is an assemblage of various components that combine to make it stand out from other packages. Read More

Your safari will give you the opportunity to visit different historical places in Rwanda, visit the Nyungwe Forest for chimpanzee trekking and other primates, get to kibuye for the boat cruise and game drive, you will visit Volcanoes National Park for gorilla tracking and so many. Read More

The 7 day safari will expose you to Volcanoes National Park to enjoy the best gorilla tracking experience, you will visit Nyungwe Forest National Park for chimpanzee tracking. Read More

It has been noted that sometimes chimpanzees in Nyungwe National Park may be unreliable, thus we as prime safaris it’s our pleasure to offer. Read More

This Rwanda gorilla safari presents you an opportunity to encounter Mountain gorillas twice in the mist of Volcanoes national park. Read More

This 2 days Rwanda gorilla tracking safari and cultural encounter involves a direct interface with the endangered mountain gorillas in the mist of Volcanoes National Park and the encounter of the Banyarwanda Culture at the Iby’wachu village. Read More

This one day gorilla safari tour to Rwanda is a perfect day break that will create memories that you will live to remember. Read More

20 Days Uganda Safari is a comprehensive safari tour package that is well designed to enable you explore the whole of Uganda in detail. Read More

12 Days Uganda safari is designed to offer you an encounter with wildlife, culture, scenery, adventure and eco tours. The safari tour takes you to Lake Mburo National Park. Read More

This 10 days Uganda wildlife safari- tour is a perfect move to encounter the African game- the big five alongside the re-known ape species including the endangered mountain gorillas and the common chimpanzees. Read More

The 7 days gorilla tracking Safari will start in Kigali and can end in Kigali, Rwanda or Kampala, Uganda. The trip involve tracking the mountain gorillas two times both in Bwindi National Park in Uganda and Volcanoes National Park in Rwanda. Read More

The 7 Days Uganda safari is one of the interesting safari tours that one can have in Uganda. Customized to the travelers’ interests, the encounter takes you through the memorable white Rhino tracking. Read More

This 5 days Uganda wildlife and gorilla safari presents an opportunity to encounter the magnificent wildlife of Uganda flourishing in their savannah habitats and a fine encounter with the remarkable Mountain gorillas of Bwindi forest- Uganda. Read More

This 4 days Uganda gorilla safari provides you an opportunity to do gorilla tracking/trekking twice in Bwindi impenetrable national park – Uganda. Encountering these mountain gorillas on two consecutive times is a different experience all together. Read More

This is a short mountain gorilla safari in Uganda. It entails the avenues of exploring the rich country side and the endangered mountain gorillas in the Impenetrable National Park of Bwindi. Read More

This 3 day Uganda gorilla tour commences and ends in Kigali – Rwanda. It is an amazing encounter of the magical scenery of Rwanda. Read More

This 3 Days Murchison wildlife safari tour is a perfect escape tour to view the African game in their natural setting including the famous big five. Read More

This 3 days gorilla safari in Bwindi impenetrable forest park – Uganda offers visitors a memorable encounter with the endangered Mountain gorillas; amidst the lush of this ancient forest. Read More

The 21 days Uganda Rwanda combined safari is one of the most comprehensive safaris that you can ever undertake in East Africa. Read More

The 15 days Rwanda Uganda safari is one of the long safaris that are designed to suit your interests in Uganda and Rwanda. Read More

The 13 Days Uganda Rwanda Gorilla Wildlife Chimpanzee & Cultural Safari is a perfect blend of the above aspects featured in both Uganda and Rwanda. Read More

The 10 days Rwanda – Uganda gorilla safari is an assemblage of various components that combine to make it stand out from other packages. Read More

The 8 Days gorilla trekking safari in Rwanda & Uganda offers the opportunity to trek gorillas in both Rwanda and Uganda. Read More

The 7 days Rwanda Uganda gorilla safari is an arrangement of its own as it opens an opportunity to track gorillas in Rwanda and Uganda, encountering rich game of Queen Elizabeth National Park. Read More

The 7 Days Uganda safari is one of the interesting safari tours that one can have in Uganda. Customized to the travelers’ interests, the encounter takes you through the memorable white Rhino tracking in Ziwa Sanctuary. Read More

Rwanda is famously known for gorilla trekking safaris and was highly brought to popularity by the world’s leading conservationists like Dian Fossey in the 1960s and 1970s. Read More

Rwanda, positioned averagely on the Central African Plateau crossed borders to join the East African Federation together with Burundi particularly to gain an easy access to the coast and a wider market of the East African Countries. Read More

Rwanda has got considerable flights that operate internationally and domestically enabling the travellers on safaris in Rwanda to transfer accordingly. With its national carrier Rwanda Air that has positioned its self in the region operating a hub and spoke approach, Rwanda can easily be accessed by Air transfer. Read More

Rwanda is a republic country found in the east and Central Africa with a population of 11.2million as per the United Nations of 2012.. Read More

Rwanda does not have a lot of emergency municipal medical response services. However, ambulances are present through SAMU and you need to call 912 from any mobile phone or via King Faisal Hospital on 078 830 9003.Read More

Planning a safari to Rwanda would lure one to myriad of thoughts about what might be needed for him/her to undertake the safari.Read More